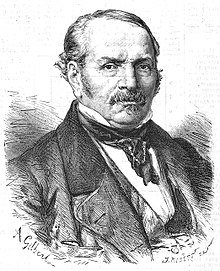 Allan Kardec was the codifier of Spiritism. With the teachings he received from higher spirits through various mediums, he wrote five books that would become the basis of the Spiritist Doctrine: The Spirits’ Book, The Mediums’ Book, The Gospel According to Spiritism, Heaven and Hell and The Genesis. He also left unpublished writings, which were collected 21 years after his death in the book Posthumous Works, and several other books of initiation to the doctrine which has not yet being translated to English.
Allan Kardec is the pen name of a French educator called Léon-Hipollyte Denizard Rivail . Rivail was born in Lyon, France, on October 3rd, 1804. He was baptized in the Catholic religion; Rivail started using the pseudonym Allan Kardec many years later, when he got in contact with Spiritist phenomena.
During a mediunic meeting at the Baudin’s family home in Paris, the protective spirit Zefiro, manifested by saying that he had known Rivail in a previous existence, during the Druids’ time, when they lived together in Gaul. According to Zefiro, at that time, Rivail was called Allan Kardec. When Rivail published his first Spiritist book – The Spirits’ Book – in 1857, he decided to sign it with the pen “Allan Kardec”, and began to use it in all his new works.

Rivail was from a traditional French family of judges and teachers; he was the son of Judge Jean Baptiste Antoine Rivail and Jeanne Louise Duhamel. When he was 10 years old, he went to Yverdon, Switzerland, to study at the Pestallozzi Institute, headed by Professor Johann Heinrich Pestallozzi. The school was one of the most respected of that time in Europe. Kardec became one of the most eminent disciples of Pestallozzi and one of the biggest spreaders of its education system, which had great influence on the French and German education reform.
After completing his studies in Yverdon, he went to Paris. Soon after, with only 18 years of age, he stood out as a pedagogue and wrote his first book in 1823: “Practical and Theoretical course in Arithmetic”, for children. In the same year, he became a member of the Magnetics Society of Paris, becoming an experienced hypnotist. At the Society, he met Fortier, a magnetizer, who in 1854 introduced Kardec the phenomenon of “turning-tables.”
Kardec founded two educational institutes in Paris and wrote several textbooks. In 1831, he met Amélie Gabrielle Boudet, also a teacher and author, whom he married on February 6th, 1832. Amelie would become a valuable contributor to their future missionary work.

The valuable educational experience of Hipollyte-Léon-Denizard Rivail prepared him for his great mission: the coding of Spiritism. Kardec was 50 years old when, in 1854, the magnetizer Fortier told him about the strange phenomenon of “turning-tables”, which had been reported in the French newspapers. The tables were moved and rotated without the intervention of anyone. At first, Kardec believed that the phenomenon could be an action of magnetism. Some time later, however, Fortier reported something even more extraordinary: the tables could also speak and answer questions.
“This is something else now,” Kardec replied. “I will believe it when I see it, and when it has been proved to me that a table has a brain to think, nerves to feel, and can become a sleepwalker; until then, I’ll see it as a bedtime story only.”
In May 1855, he witnessed the phenomenon at Mrs. Plainemaison’s house, and then no longer doubted it. “My ideas were far from being held, but there was a fact that should have a cause. I foresaw something serious beyond the apparent futility in this kind of game that was made of these phenomena, and also the revelation of a new law, which I promised to study further.”
In meetings at the Baudin’s family house, Kardec could observe the phenomena more carefully. The young Caroline and Julie Baudin wrote on a slate with the help of a basket, a method that required the work of two people and therefore totally excluded the intervention of the medium’s ideas. There, he saw several communications and responses to the questions posed. Kardec concluded, after all, that the messages were actually intelligent manifestations produced by the spirits of men who have left the Earth.

It was at the Baudin’s family home that Kardec made his first serious studies about Spiritism. He revealed: “I applied to this new science, as it has been done, the method of experimentation; I had never made preconceived theories. I carefully watched, compared, and inferred consequences. From the effects, I tried to find the causes, by deduction and logical sequence of facts, not assuming an explanation as valid until I could solve all the issues of the question”
“From the beginning I understood the seriousness of the task that I would take; I foresaw in these phenomena its key issue, so obscure and controversial; the past and the future of humanity, the solution of what I’ve searched through all my life; it was, in one word, a revolution of ideas and beliefs, it would be necessary, therefore, to act with care and not hastily, be positive and not idealistic, to not be misled, “he stated.
Kardec took to each session a series of questions, which then were answered by the spirits with precision, depth and logic. Those answers came together and took on the proportion of a doctrine, so he decided to publish them in a book. When the results were developed and completed, they formed the basis of The Spirits’ Book. More than ten mediums provided assistance for the first edition, published in April 18th, 1857. This marks the Spiritist codification milestone.

The Spirit of Truth

One night, in March 1856, Kardec was writing in his office when he heard banging on the wall. The knocking persisted with more strength and changing places. Kardec tried to determine where the banging came from but found nothing. Each time he tried, the noise ceased. When he returned to work, the knocking resumed.
At the next day, during the Baudin’s family home meeting, Kardec asked the spirits to explain the fact; then he found out that the author of the knocking was his spiritual guide willing to communicate with him. The enlightened spirit was present, and said: “For you, call me Truth, and every month, I’ll be here, at your service, for a quarter of an hour.” Later, Kardec wrote that the Spirit of Truth’s protection never lacked, at all times of his life.
The first revelation of Kardec’s mission was made on April 30th, 1856, through the medium Japhet. The communicating spirit said: “The worker is Rivail rebuilding what was demolished”. The Spirit of Truth confirmed the mission, through the medium Aline C. on June 12th, 1856, warning him of the troubles that he would have to face: “A reformer’s mission is full of pitfalls and dangers; yours is tough, I warn you, because it is the whole world that needs quivering and transformation”.

Allan Kardec founded the Spiritist Magazine on January 1st, 1858; it would be as he wrote: “a free magazine, keeping the public well-informed of all developments and events within the new doctrine and preventing it both against the credulity’s exaggerations as against skepticism”.
On April 1st, of the same year, he founded the Parisian Society of Spiritist Studies; it was the doctrine’s first study group. In 1860, the Society and the Spiritist Magazine settle in at the Passage Sainte Anne, at 59 Rue Sainte Anne, Paris. Allan Kardec practically lived there, writing for magazines and newspapers, publishing works and receiving visitors.
On January 15th, 1861, he published The Mediums’ Book, the spirit’s science base. In 1864, he released The Gospel According to Spiritism, which is the doctrine’s moral foundation. In 1865 he published Heaven and Hell, an analysis of divine justice according to Spiritism. In 1868, he finally published The Genesis, the last book of the basic encoding, in which he talks about the creation of the universe and natural laws, and explain about the predictions and the so-called “miracles” of the Gospel, which in the Spiritist view the phenomena are natural and understandable in the light of reason.

The Barcelona’s Act of Faith

The Spiritist movement also encountered difficulties and opposition. One of the manifestations against the new doctrine, known as Barcelona’s Act of Faith, happened in Spain on October 9th, 1861. Three hundred Spiritist books and brochures were burned at the city’s square by the order of the Barcelona’s bishop. Among the publications were a few numbers of the “Spiritist Magazine”, “The Spirits ‘Book”, “The Mediums’ Book” and “What is Spiritism”.
The Spirit of Truth spoke about the event: “My opinion is that this event, the auto-da-fe, will result in a much higher yield than not reading a few volumes. The material loss is nothing compared to the outcome that such action gives the Doctrine. “
In the 1861’s Spiritist Magazine, Kardec wrote: “Thanks to this reckless action, everyone in Spain will hear about Spiritism and will want to know what it is; this is what we want. They can burn books, but not its ideas. (. ..) And when the idea is great and generous, it finds thousands of hearts willing to adore it.“

The lease where the Parisian Society of Spiritist Studies was located was coming to an end, so Kardec decided to take his belongings to his own apartment in Villa Ségur. In the morning of March 31st, 1869, in the midst of preparations, he suffered an aneurysm. He gave an edition of the Spiritist Magazine to a bookstore clerk when he suddenly leaned over himself, and without saying a word, discarnated at 64.
Amélie Boudet, his wife, was at that time 73 years old. She continued her husband’s work at the Parisian Society of Spiritist Studies and lived until 1883, when she passed away without direct heirs, leaving all his assets to the Company.
At Kardec’s funeral, on April 2nd, Camille Flammarion made a fine speech: “We will meet in a better world, and in the great sky, where we will use our most precious faculties; we will continue the studies for which the Earth is not yet a prepared field. We are most grateful to know this truth, than to believe that the whole body and soul are annihilated with the cessation of an organ’s functioning. Immortality is the light of life, as this sun is the light of nature. See you soon, my dear Allan Kardec, see you soon!”